Blockchain As A Service

The V2 BlaaS is a cross-cloud, cross-portal, cross-framework infrastructure used to deploy and operate all types of
blockchain applications.
The aim is to change the existing problem of the high cost of developing and deploying blockchain applications by,
just like the internet, providing public resource and interoperability environments to developers. This greatly
reduces costs associated with the development, deployment, operations, maintenance and regulation of blockchain
applications and, thereby, will accelerate the development and universal adaptation of blockchain technology.

Blockchain development, deployment, and management is                 expensive and complicated

Create Projects and Keys for Connecting to Public Chain nodes 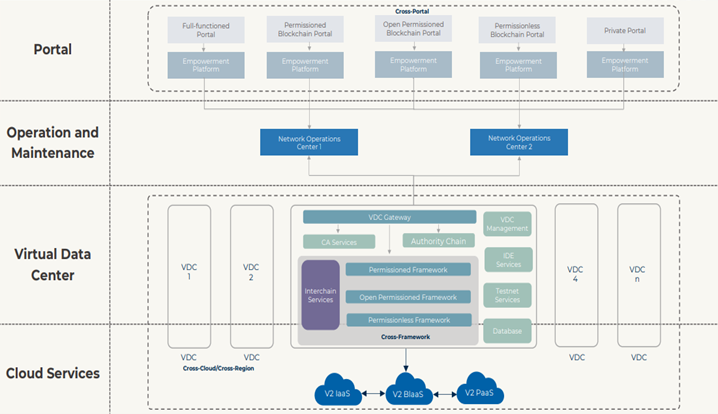 1. Trust
Enables trust between participants who don’t know each other.

3. Improved security and privacy
Creates and unalterable record of transaction with end-to-end encryption, which reduces fraud and unauthorized activity.

4. Reduced costs
Creates efficiencies by reducing manual tasks such as aggregating and amending data and by easing reporting and auditing.

6. Visibility and traceability
Tracks the origins of a variety of items, such as medicines, to confirm they are legitimate instead of counterfeit and organic items to confirm they’re indeed organic.

8. Individual control of data
Gives entities the ability to decide what digital data they want to share, with whom and for how long, with limits enforced by smart contracts.

9. Tokenization
Converts value of an asset into a digital token recorded and shared via blockchain, Non-fungible tokens are used to sell digital art.

10. Innovation
Leaders across multiple industries are exploring and implementing blockchain-based systems to solve intractable problems and improve long-standing cumbersome practices, such as verifying the info on a job resume.

Blockchain and other Distributed Ledger Technologies (DLTs) represent the next-generation infrastructure for the internet, enabling trust and transparency in a decentralized but controllable way

Verification and transfer of financial information and assets

Wide Array of Blockchain Use Cases  Beyond Digital Currencies and Payments

Get the Latest Update